If I could sum up What To Do When It’s Your Turn by Seth Godin in a single, not-so-eloquent line it would be:

So that’s probably an oversimplification of the book, but I feel like that oversimplification is within the spirit of the book. Rather than waste time coming up with an eloquent line that captures all of the aspects of Mr. Godin’s work, I went and did it. I took my turn and now that line is out there for you to judge. 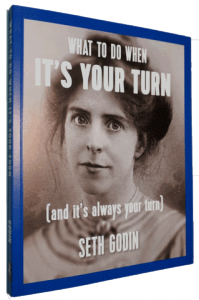 That’s just it though, WTDWIYT preaches the same don’t overthink it, just get out there and do it approach that has also been championed in other books I’ve read this past year, like Dan Norris’s The 7 Day Startup.

To me, taking your turn means to shut out the nay-saying voices in the back of your head and from outside sources. It means to put faith in yourself. To stop waiting to be told to become a leader or create something special. Stop finding excuses not to do things. Just do things. Paint a landscape. Record a podcast. Write a book. Learn a language. Travel the world. Fight a bear1. Pitch a new idea at the company meeting. Create an app. take a risk that you’re unsure about.

Bad ideas, good ideas, it is not yours to judge until later. Right now, your job is to only produce.

Maybe it won’t work2. But you’ll learn, and the next time it will be better. You’ll be better. Putting yourself out there is scary. But it shouldn’t be. It seems that often our fears are more imagined than real. And you’ll find the community as a whole is more supportive than the trolls in YouTube comments.