Hopefully that last paragraph doesn’t come across as a dig. I’m just not a good enough writer to recap their author bios without quoting directly from it. These two definitely know their WordPress and, like their bios say, can write about it in and engaging and informative way.

I consider myself to be a decent WordPress developer, but essentially all of my coding has been self taught by extensive Googling and trying things until it works. So a few months back I decided to start reinforcing my foundation by diving into some of the fundamentals of web development with the A Book Apart on HTML5 and CSS3. And with my primary day-to-day focus being WordPress I figured I should find a good, quick read covering it as well.

Throw in 70% off on SiteGround hosting1, which I had been looking at testing out anyway, and I was sold. 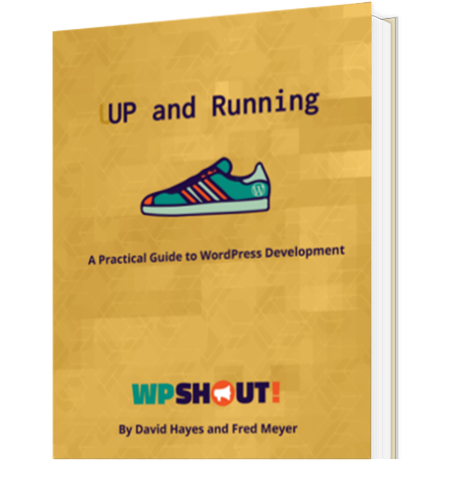 WP Shout aims to teach you everything you need to know about WordPress development.

If you’re already familiar with the Loop and the difference between Posts, Pages, and a Post Type you’ll have a good head start on the book’s topics. Even if you do it doesn’t hurt to check your foundation. You may uncover a few cracks you previously hadn’t noticed.

That’s my attempt at a metaphor. WP Shout uses the metaphor to excellent effect. Their WordPress as a factory example is one of the best ways I’ve seen for explaining how WordPress works in language that everyone should understand. It makes a lot of sense and is great for helping beginner’s get a grasp of what WordPress can build, and how it works.

The book is great for someone looking to get started developing in WordPress. One of the problems starting out is figuring out what you need to start learning in the first place. Up and Running does an excellent job of building up from the basics of WordPress to far more detailed portions of the CMS. I’d put this right up there with Smashing WordPress as my suggestions for people getting started with WordPress.

Now being a fairly experienced WordPress developer, I already had a decent grasp of a lot that Up and Running covered. Now, as I said above that’s not to say there isn’t things a developer could learn from the book. They’ve got great explanations of more advanced topics as well, such as the transients and widget APIs and Object Oriented Programming within WordPress. But where you may get even more value is with some of the additional content.

The additional content is really what sold me on checking out Up and Running. I already mentioned the 70% off SiteGround hosting deal. But the real value comes from the screencasts and interviews included. Even if you’re an experienced developer, it never hurts to see how other developers are tackling similar problems. And the Premium Tier comes with 6 interviews from some great WordPress developers including Mika Epstein, Jenny Wong, and Patrick Rauland.

There’s also video series on developing with child themes and building your own theme from scratch.

If you’re a pretty competent WordPress developer, making your own themes and plugins for some time now, you’ll probably gain more from the additional content than the book. Of course, in my opinion it doesn’t hurt to have a resource to go back to when you’re in a bind on a project.

If you’re new to WordPress development, Up and Running makes a great guide to getting started working with WordPress. Whether you want to make edits to a theme on a site you run, build a plugin, or create a theme from scratch Up and Running will get you…up and running2.